Privet Matryoshka’s!! Finally we get to see the matches from Group H take place. One of the most interesting match ups taking place today is between Russia and South Korea. At the moment I’m anticipating the match, hoping to see Russia taste its first victory in the World Cup start up. With Fabio Capello as Russia’s coach- I’m optimistic as ever. There may be that loss of Russia’s midfielder Roman Shirokov due to an injury, and some might even start thinking that Russia won’t be able to play an expansive, attack minded game against their South Korean opponents, but that’s pessimism taking over- and there’s no room for that it’s #allin or nothing. Right now on the eve of today’s biggest game for Russia, i’m hoping to see their underdog status dissipate. And oh yeah, can you believe it??? Psy is going to be cheering on South Korea, guess you’ll have to watch the game today to see all of the action. 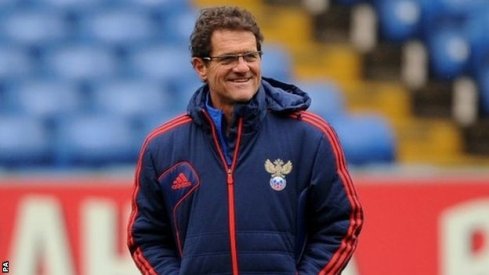 “The important thing about this tournament is that Russia is in a World Cup after 12 years,” Capello countered. “That was an important step. We need this experience to understand the world level of football. This will give us great experience for 2018 but will also prepare us for the next European Championships, not just the World Cup at home.” -Fabio Capello

Capello’s famed disciplinarian streak has again materialised at this World Cup with his players banned from using Twitter. “Tweets can be a nuisance if they are not written in an intelligent fashion,” he explained in Cuiabá. Overall, however, his strict approach has been welcomed by a squad that has lost focus in past tournaments. “Capello demands discipline and it’s a good thing because everyone is working hard, giving 100% in every session,” said Berezutski.

“The experience of games at the World Cup helps,” said Capello. “Four years ago, I was at the tournament with the England team, but it is important to remember which players you are coaching and what their mentality is. Experience helps you to fix mistakes you made in the past.” -Fabio Capello

Next matches for Russia:

Who are you cheering for? Who do you think will win the Russia vs South Korea game?